With my vacations come and gone it is time for me to get serious about my training again. Or is it?

I did spend two weeks learning what the gym was again and what my next six months of training will look like – high volume hypertrophy training, please. My goal is to build all the muscle and get stronger along the way. But I had to stop along the way and participate in my third #UPowerful Virtual Powerlifting Meet. Because what better way to plan where you’re going by than by seeing where you are?

The #UPowerful virtual meet is brought to you by the awesome Jennifer Vogelgesang Blake and Jen Sinkler as part of the Unapologetically Strong strength program they launched last year (btw if you are looking to get into powerlifting or just get stronger this is a GREAT option for you). This virtual meet is the culmination of a 12-week online coaching program JVB runs for her clients to test their newfound strength but it is open to all comers. Each time one is announced I’m among the first to enter because who doesn’t like to see how strong they are – or to see social media light up with strong, powerful women?

The rules are simple: during the designated meet week you are to complete each of the three competition lifts (Barbell Back Squat, Barbell Bench Press, Deadlift), film your best attempts, post them on social media with the hashtag #UPowerful, and log your results for scoring. I’ve been posting my attempts using my other social media accounts (you can see my videos here or here) but will recap here for simplicity:

What did I learn? Lots!

For my back squat I learned that I need to trust that I can stand up with the weight when I hit competition depth (hip crease below parallel or knee) so I have to work on keeping tight in the hole and driving up. I was able to stand up with 300 but the depth needs to addressed. I also learned that I have found the (current) optimal placement for the bar on my back to make even 300 pounds feel relatively light as I walk out position. This is kind of a big deal because as I am more comfortable with the weight on my back I will get more comfortable squatting low to depth.

For my bench press I learned that I do indeed use leg drive (thanks for pointing this out, JVB) but if I’m not set properly at the top I can’t get the bar off my chest. I’m still not as consistent as I can be on setup. I’m also going to work on foot placement – from what I’ve read I want to set my feet closer to my hips and point them more forward so I have better leverage when I do my leg drive and feel like I am really using that advantage to help move the bar (not to mention keep my butt on the bench).

For my deadlift I learned I am not tight enough at the start of my lift. Really?!? To help me overcome this I am going to learn to brace and breathe at the bottom just before the pull. This is going to be HARD for me because it is opposite of how I setup now AND I have problems breathing (that’s a topic for another post). It will be like learning to deadlift all over again, retraining my body and learning to feel the correct muscles firing.

I’m excited to hit the gym next week and start working out the kinks in all my lifts. I’ll be sure to keep you updated with my successes and failures along the way. In the meantime, have fun and do a search on social media for the hashtag #upowerful. You will be blown away by the strong women you see!

Let me introduce myself. I know we’ve met before but I want to give you a little more of my background, help you understand what motivates me and the reasons I do what I do. And how and why things around here will be changing.

I’m Donna Adams, aka Donna the Destroyer. I am an avid Powerlifter, Software Quality Assurance professional, outdoorsy, liberal woman. My current mood is to let my liberalism out into the world and see where it leads me. Afterall, it is this liberalism that helped me find my voice though powerlifting. You may be wondering how, so I’ll tell you a little story about me.

I grew up in a blue collar, lower-end middle class household, the fourth of five children. This was a strong democratic household. My parents showed through their actions that it is our civic duty to vote, and they leaned heavily democratic. My first memories of politics were in the 80’s – Reagan vs. Carter, Reagan vs. Mondale. I remember being upset that Reagan kept winning even though he wasn’t for the little people, the people NOT in power. I realized that I was a Democrat and that the Democratic party was the party for the people and by the people – ALL PEOPLE. Not just the rich, not just those who looked like me – ALL PEOPLE. And this was important to me then and it is important to me now.

Maybe it was because I was picked on for being different (which is odd, since I look at myself and see a VERY white, privileged woman), maybe it was because I was a girl growing up smart in a male-dominated world (subtle sexism, anyone?), but whatever the reason I always chose the side of the other, the different, the oppressed (if they truly existed in my pocket of suburbia). I have always surrounded myself with people of like mind and always wanted to do more. There were so many good intentions, good thoughts, moments of anger and rebellion where I wanted to take action but didn’t – it wouldn’t do, it wouldn’t be lady-like, don’t rock the boat, your voice isn’t big enough for people to hear. But in the back of my mind I knew that I needed to find and grow my voice.

I am fortunate in many ways, privileged in a few (color, class) and due to this fortune I was able to seek out my current tribe. I had the time and money to go after what I wanted. I began looking for a place where I felt included regardless of who I was and what I could do and where I would learn the ways of the Jedi (ok, not the Jedi but where technique would be the focus, not just “getting done” with the workout). And soon I found the perfect place, the people I whose tribe I wanted to join. These people celebrated the strength of women, cared about the foundations of strength, and seemed fairly liberal.

First I stalked them (social media, facebook, hello interwebs) and then I got the courage to find them in person. In the beginning I was quiet and tried to hide in the background, not making waves, trying not to be noticed. I just wanted to absorb everything and everyone and give the minimum so I could be part of the group. Not because I am selfish (sometimes, but not always) but because I am shy. My voice was still small. But my spirit was growing with all the talk of inclusion and helping and being a community for ALL the people. The liberal inclusive light was shining on me.

It was not until a fateful day in November 2014 (wow, two years ago!) when someone uttered the words “who wants to do a powerlifting meet” that my ears perked up and my voice began to come out. Powerlifting made me feel powerful, strong, able to take on great things. For a long time this simply meant my relationships, my work, my immediate life. But then things began to shift within me, my focus began turning outwards. How could I help other people? I began encouraging other women (and some men, too) to see that building strength on the outside helps to build strength on the inside. My voice began getting louder. And I started a blog to chronicle my powerlifting journey.

I have taken you from my little gym and local meets all the way to the national stage and since then I’ve been trying to figure out where I should take you next. The events of this past week have helped me figured it out: I’m taking you all on the journey as I find out how loud my voice can grow and shout out to the world that while I will accept the president I will not accept the changes that I fear will come. Oh, most of this blog will still focus on powerlifting and my progressions, regressions, aches, pains and triumphs. But here and there, sprinkled amongst the words of strength and encouragement about lifting will be messages of solidarity, hope, and action for the nation.

And here is my first action: I’m marching on Washington in January. I had planned to participate in the inauguration of the first female president but instead I am going to march, show my allegiance to all WOMEN and all minorities. Because this is a stand I have to take. I am not going to let OUR current rights be diminished because someone can’t hear my voice. I’ve finally found it and now is the time for me to see how loud it can grow.

I admit it. I’ve been neglecting you. Not with intention, just with a lack of things to say. I’ve regaled you with my stories of strength, overcoming mindeset obstacles and achieving my goal. And then I stopped. Or at least that may be how you are feeling right now.  After months of training with a singular goal in mind and bringing you along in that journey I needed to take a short break. It’s time for the Destroyer to regenerate and drink from the fountain of life for a while.

It’s been a good few weeks for that. Actually, the first two weeks were kind of hard – that was in between trips to Atlanta for Nationals and Paris for my soul. It was a time to focus on recovery and a little rehab (pesky shoulders) and to wait. No hard training, no real goals. But it was a time to plan. Always planning.

There was/is much to plan for: Paris, building strength, building muscles, figuring out how to eat for that, my next competition, Nationals in 2017 – maybe the Arnold in 2018? And then there is the rest of my life – social outings, family gatherings, weekend adventures. I get pretty busy when I let myself. So I’ve been quiet here. Maybe too quiet for some but I think it’s been just right.

I’m sitting here in Paris, listening to the traffic, feeling the warm sun on my back thinking about my return and what it means. Back to a routine for one. With all this walking, sight seeing, sleeping in and eating all the food it’s been hard to want to do my rehab work while traveling. I started strong and then my travel companion (look – a second Doctor Who reference in just a few paragraphs) arrived and we’ve been going pretty much non stop for the last three days.

It’s been good but I’m glad I opted for this rest day. We’ve got two more days of Paris and I’ll live them to the fullest and enjoy every minute but I’m also thinking of my return. I’m excited to discuss the first leg of my new journey with my coaches JVB and Julia Ladewski. I am refreshed, reinvigorated and will be ready to go.

Thanks for sticking with me on this journey. I’m sure we’ll have plenty more adventures to discuss in the coming year. Until then, here are some photos to make up for my absence. 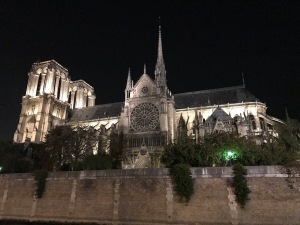 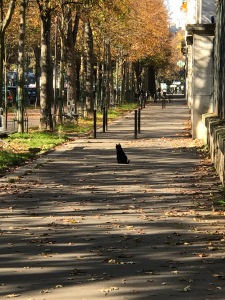 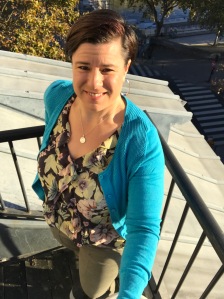 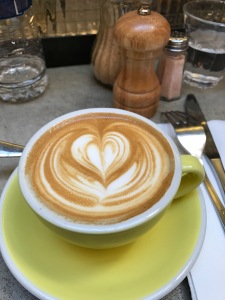 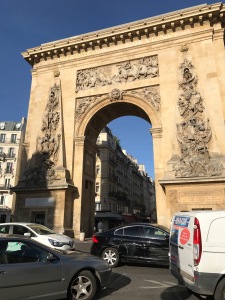 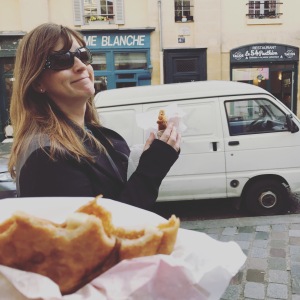 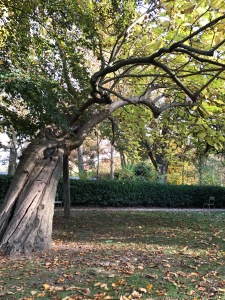 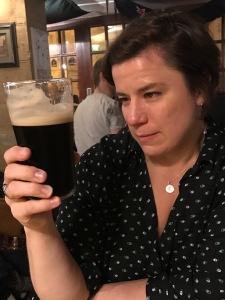 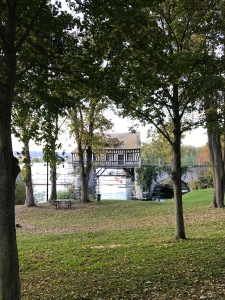